Looking for a nursery idea or two for your new baby but have no idea where to even start?  I scoured the internet looking for some ideas for you and found this celebrity baby nursery (swoon).

But as usual, I’m putting my own spin on it to save you some time and money.

Scroll down to find out how!

How about a reclaimed wood wall like Fordham Rosenbaum’s nursery? 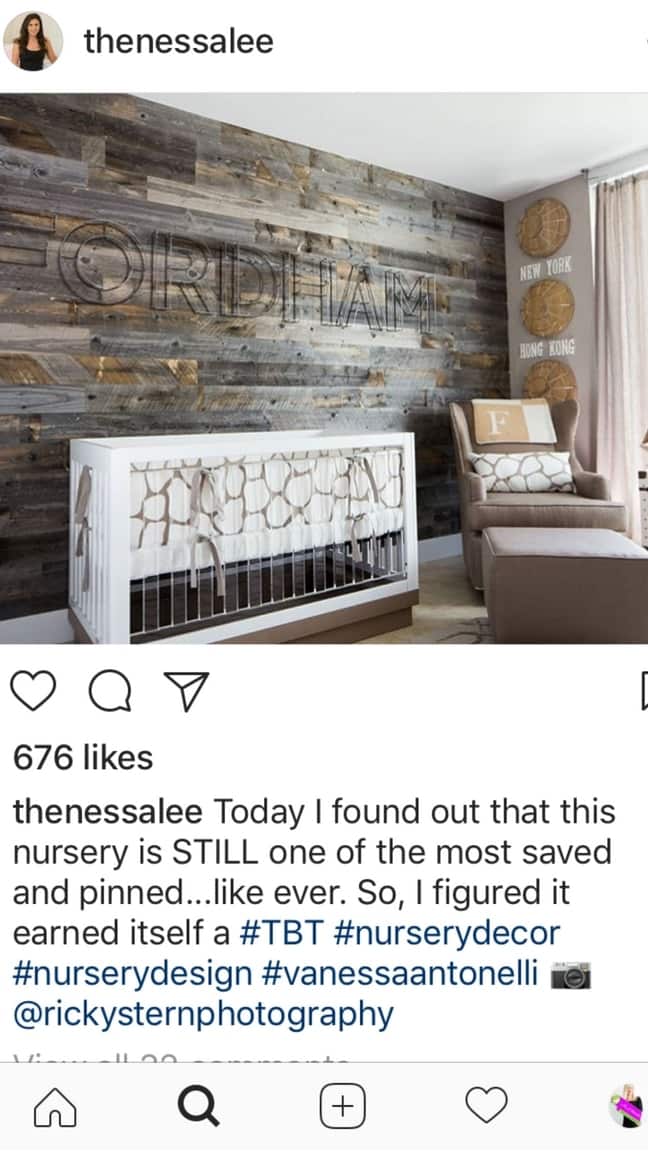 Celebrity designer, Vanessa Antonelli, designed this very organic, natural looking baby nursery for parents Ashley Hebert and JP Rosenbaum – any Bachelorette fans out there? (P.S. the beautiful photo of the baby nursery was captured by Ricky Stern Photography and it was saved from @thenessalee on Instagram).

It features a gorgeous reclaimed wood wall that is to die for – how’s that for a nursery idea?

Apparently it’s still one of her most saved and pinned nursery ever.

The BIG Problem with this Nursery Idea

I do see one BIG problem though.  Well two.  Actually, it’s three.

Get The Look With None Of The Problems

BUT you can get that look with wood wallpaper.

Here’s one that I sell that looks almost identical to the real thing!

My Horizontal Barn Wood Wallpaper is:

On the fence about removable wallpaper?

When asked “What are your 2015 Design Predictions?” Scot Meacham Wood (formerly of Ralph Lauren) said, “Wallpaper is still coming back strong – and I think the next year is going to provide even more options and expansions in the wallpaper market.”

Don’t believe it looks like the real thing?  Need to see it up close?  You can always order a wallpaper sample.

Looking for a hot deal on wood wallpaper?

Join my newsletter community and I’ll let you know when all my sales are happening (and maybe even a few extra coupon codes).  You’ll also get more ideas and photos of my wallpaper in action (in real customer’s homes) and DIY tips.

About the Author: Adrienne Scanlan

Hey, I'm Adrienne…your personal mural expert! I can teach you how to craft your own unique wall (that you simply can’t get from a big box store) as I decorate TV sets, local businesses and customer’s homes with my wallpaper murals and hand-painted murals.