Holmes Next Generation | Behind the Scenes Photos

Is anyone else out there obsessed with DIY home renovation and decorating TV shows?  Have you seen Holmes Next Generation yet?

Never in my wildest dreams did I think I’d get to work on a new TV show with the Holmes family – on the DIY Network, no less!

I thought I’d share some behind the scenes photos (keep scrolling down) but here’s a quick overview of the episode first.

I got a call from the producer of the Holmes Next Generation TV show one day while I was painting a mural.

She explained the Mike Holmes Group was creating a new show where Mike’s next generation (a.k.a. Mike Holmes Jr and Sherry Holmes) were taking over, rescuing homeowners from bad renovation jobs.

They were looking for a muralist to help decorate a baby’s nursery – and the catch was that the mama was ready to give birth any day and the house was totally not baby-ready.

The Mountain Mural in the Nursery 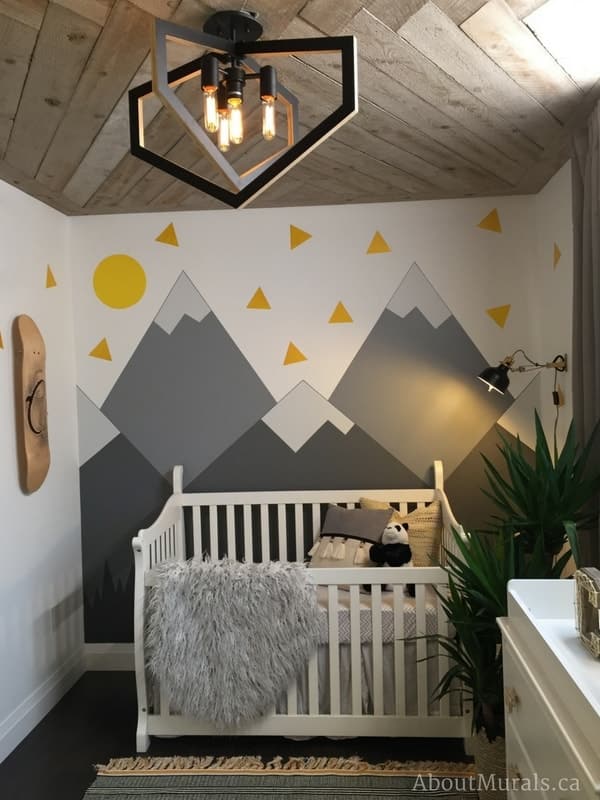 Here’s a quick pic of the mountain mural I painted on the 2018 episode called “And Baby Makes Three.”  I have another blog post with a ton of photos of the nursery if you’re interested!

So you want the scoop on what it was like to work with on the set of Holmes Next Generation?  Here ya go:

Get a Quote for a Hand-Painted Mural!

This is the day I met with Mike Holmes Jr and Sherry Holmes to do the consultation for the mountain mural.  They were super friendly, but I realize how short I am looking at this pic (I’m even wearing heels – and Sherry is NOT!).

MJ’s height came in handy while trying to paint a triangle close to the ceiling! Haha 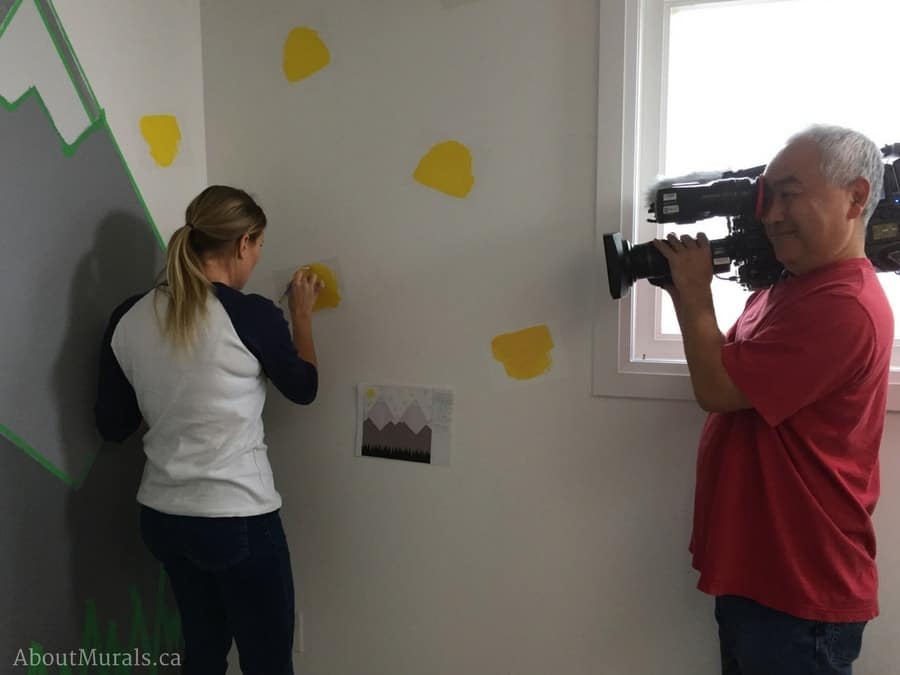 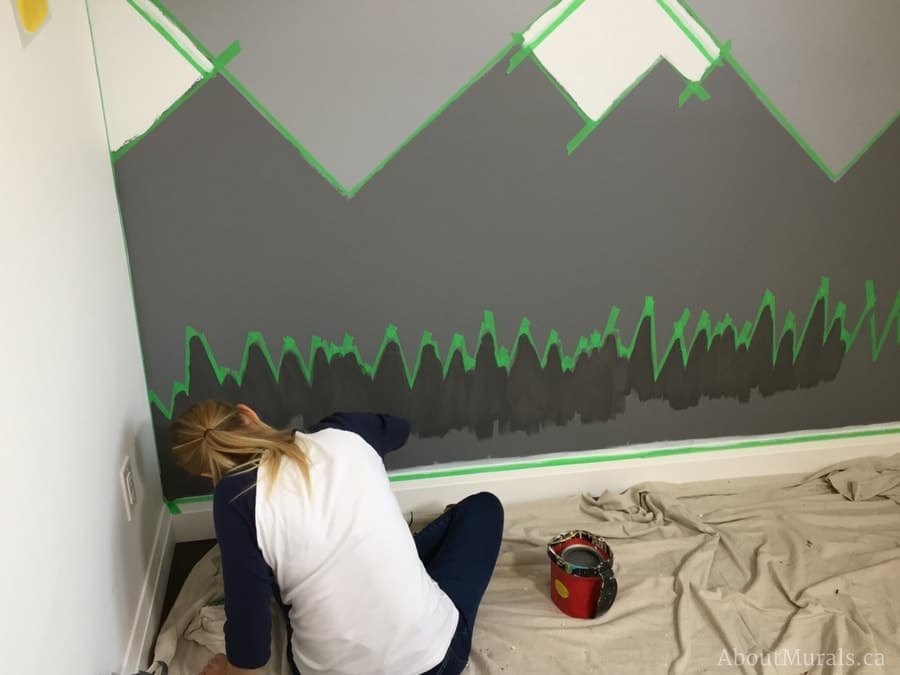 While filming, I got to teach Sherry how to paint a mural.  She’s a total natural and did a great job! 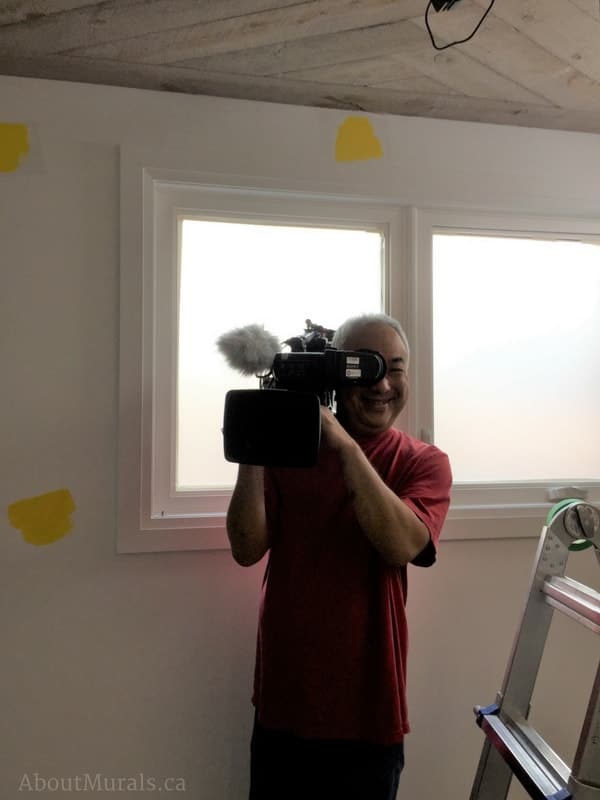 Me on camera, though?  That totally didn’t feel natural.  But the camera man, Steven, was a pro and kept me calm enough. 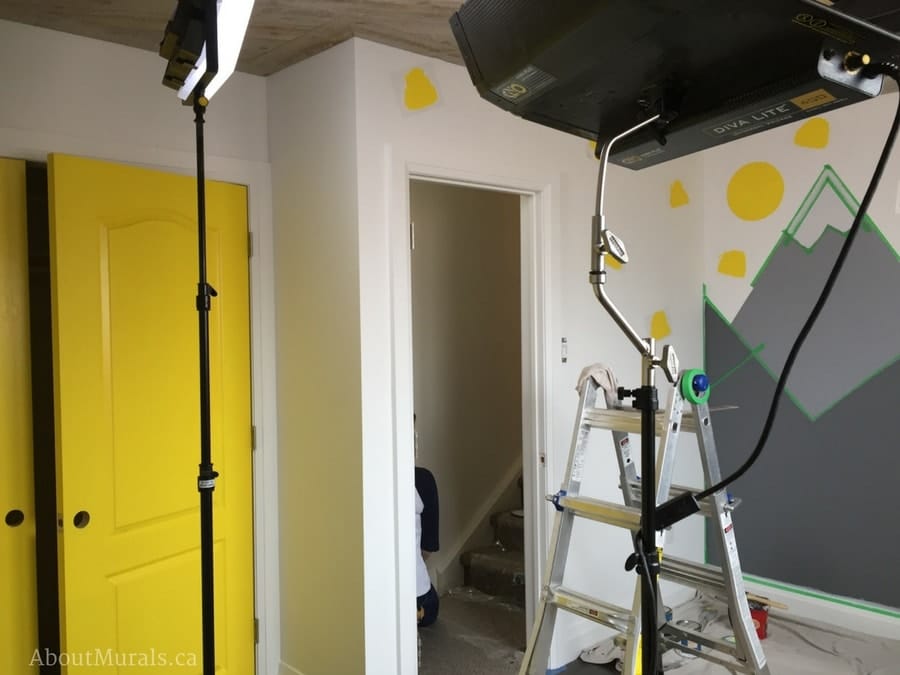 Working on set was slightly different than my regular work day.  I normally work alone in a totally quiet space.  Usually the furniture is moved out of the room and I have lots of space to work in.

My days on the set of Holmes Next Generation were the complete opposite.  The crew were in and out of Cohen’s nursery all day, laughing and poking fun at each other.  There was a ton of equipment to work around and consider.  And lots of stopping and starting while they filmed segments.

Would I do it again?  In a heartbeat!  It was exciting, fun and I learned so much about how TV shows are produced. 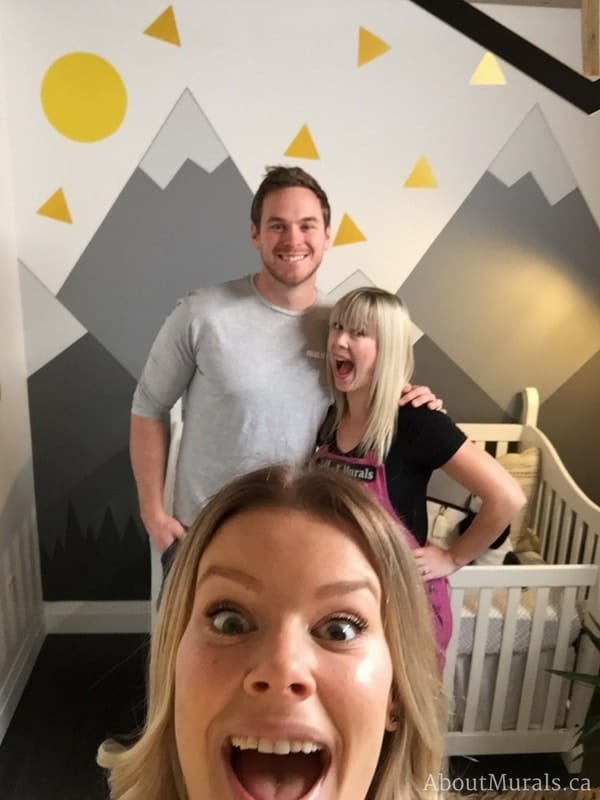 After I finished painting the mountain mural and they finished the rest of the decorating, I got to snap a few photos with Mike Holmes Jr (or MJ as he’s called on set) and Sherry Holmes in Cohen’s baby nursery.  This pic captures them to a tee – silly, fun and total hearts of gold. 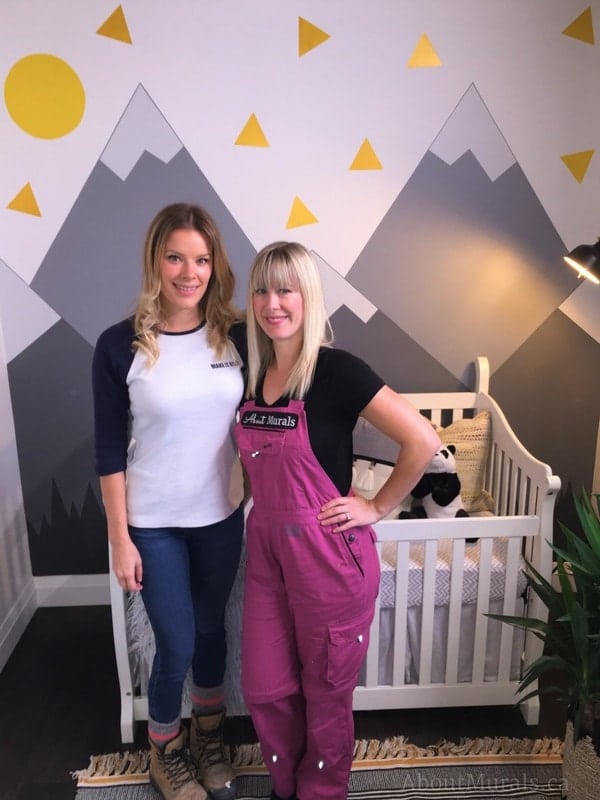 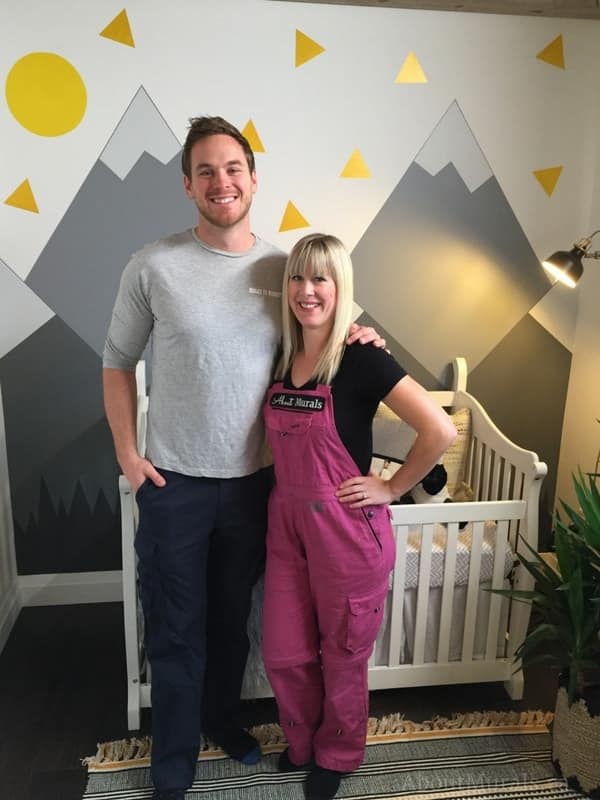 I had no idea what to expect on set.  Sherry and Mike Jr made me feel comfortable from the start. 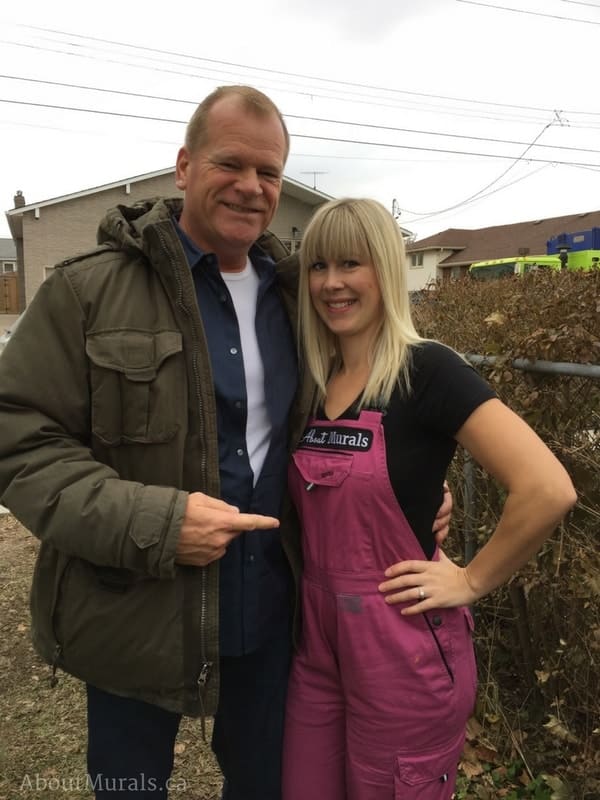 At the very end, I met Mike Holmes.  Just like his kids, he was welcoming, kind and thoughtful.

But I’ll admit…he wears overalls better than I ever will!

Check out all the photos of the whole nursery! 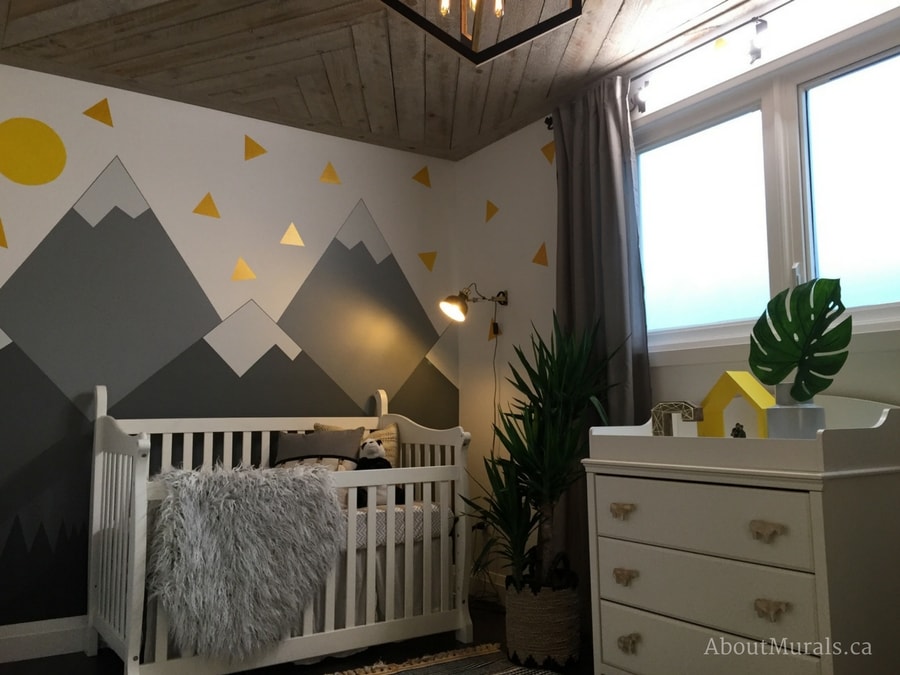 Learn how to paint a mountain mural yourself! 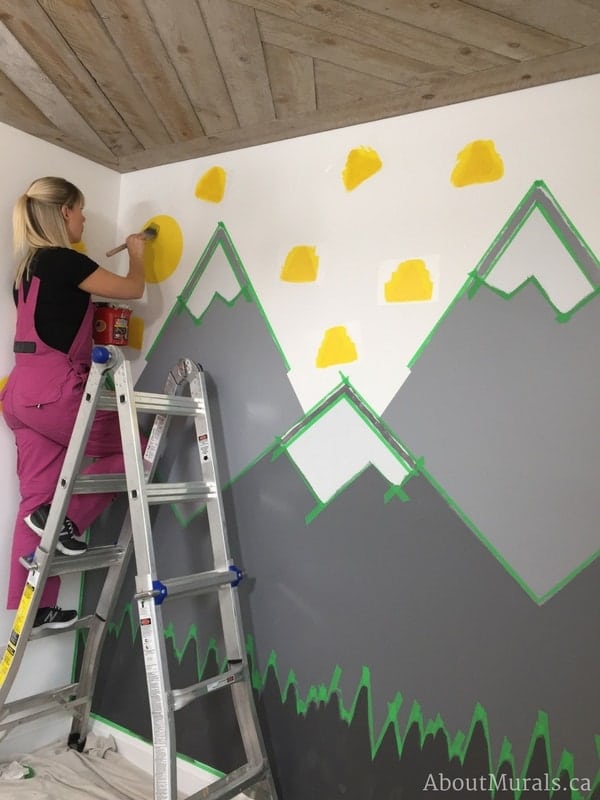 Or wanna learn how I painted the mountain mural? 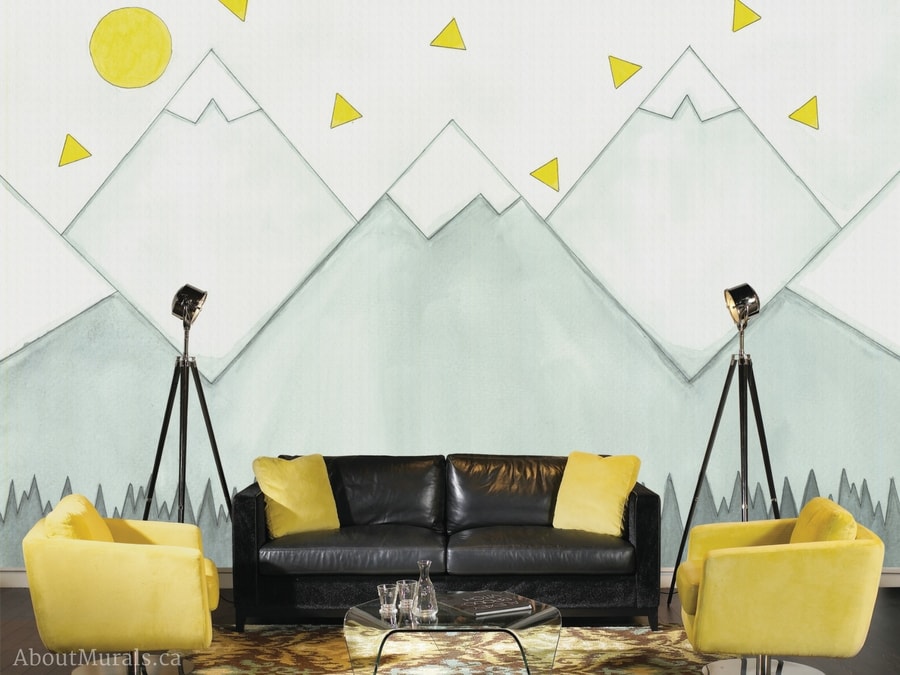 Did ya know – I replicated the Nursery Mountain Mural on wallpaper?  It ships for free in Canada and the USA.

I’d love for you to join my newsletter community.  I’ll share more behind the scenes pics of me working with celebs, mural inspo, DIY tips and even some hot deals on my wall murals.

See prices & sizes of this wallpaper!

About the Author: Adrienne Scanlan

Hey, I'm Adrienne…your personal mural expert! I can teach you how to craft your own unique wall (that you simply can’t get from a big box store) as I decorate TV sets, local businesses and customer’s homes with my wallpaper murals and hand-painted murals.